UNITAMS and the Critical Transition in Sudan 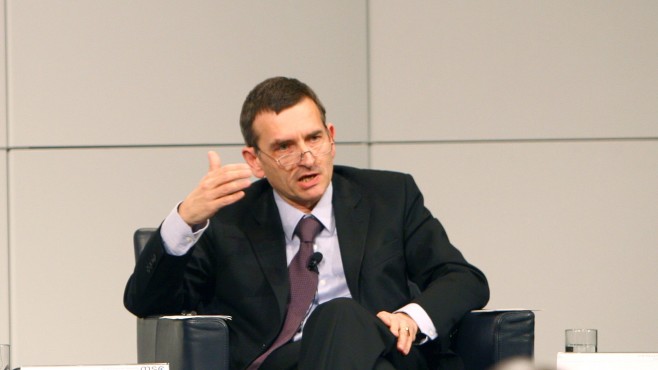 Can Volker and his slim team overcome the obstacles and help the Sudanese reach the elections?

The meeting with Dr. Volker Perthes, the UN Secretary-General Special Representative (SGSR) and Head of United Nations Integrated Transition Assistance Mission in Sudan (UNITAMS) was wonderful. It was the first week of November, a time called in Sudan “the breath of the winter” because the winter starts to breathe in some of the heat from the weather then will breathe out the cold air in December up to February. We were seven press writers and media leaders including the newly appointed director of the Sudan News Agency (SUNA), Dr. Fikreya Abayazeed, she is a professional journalist with no political affiliations and was a Senior Editor at the National News Agency before Burhan decisions of 25th October 2021.

I did not miss the opportunity to speak about my proposal of the Sudanese great compromise that I wrote in a previous article. I suggested granting Freedom and Change Alliance (FCA) the “blocking third” of the Parliament – in exchange for – opening the two-third for early elections. It will be a transitional-electoral hybrid period.

In the session, the toughest question to Volker was just 30 seconds from Osman Merghani, the editor of Al-Tayar paper, “Do you think the UN efforts to mediate between the military and the civilians will stop if the military and a faction of FCA chose to appoint another Prime Minister, or the efforts of UNITAMS will continue?”, Osman said.

I believe that Volker thought about that previously, and he has a “yes or no” answer for the question but he didn’t make it, he rather explained why it is very crucial for the transition to continue with a stable partnership with the prime minister Hamadok and the military, and to maintain a civilian-led government.

From my side, I think UNITAMS should continue under any circumstances to mediate and to deal realistically with all sides.  If the mediation is curtailed or suspended, I believe, that means declaring the failure of the transitional period and opening the way for a worse scenario. Definitely, the ideal solution is the dialogue that leads to the return of Dr. Abdalla Hamadok but Sudan is not exempt from unstable experiences that have happened before in Africa. After all, that is why UNITAMS is here.

Currently, there are 17 UN missions and offices of envoys in Africa. The peacekeeping missions in Africa are seven. UNAMID stayed in Sudan for thirteen years from 2007 to 2020 but still, the UNISFA in Abyei, a disputed area between the two Sudans. If the solution for UNAMID was to give up at times of dispute or failure, they would have left Sudan long before achieving their goals.

The birth of UNITAMS also happened after a big dispute between both transitional components, military and civilians, and also between friends of Sudan. The process of choosing an SGSR to head the mission witnessed a conflict between all international and national actors. Finally, all of them agreed on Dr. Volker, the German political scientist, academician, and writer, he was the director of the German Institute for International and Security Affairs (SWP). He served also as a Chairperson of the Ceasefire Task Force (CTF) of the International Syria Support Group, UN Assistant Secretary-General, and a Senior Advisor to the UN Special Envoy for Syria.

In our meeting with Volker, there was an argument from one of the attendants defending the idea of a 10-year transition period. For me, it was clear that the liberals and the leftists in Sudan expect that the elections will re-produce Islamists and traditional conservative powers. The tiny minority from the elites and some activists know very well that they will lose. To avoid that, they want to prepare and design the political arena in order to be balanced and not influenced by the automatic majority.

In reality, they are wrong and will never be able to do that by extending the transitional period, it will rather make them more isolated and unpopular. Moreover, the power will spoil activists by changing their rule to a civilian dictatorship. During the past two years, this recipe has proven that it led to negative results.

The message that I have been receiving from my sources among the tribal and traditional leaders, local communities, and the wider spectrum of Islamists and conservatives – being progressive or radicals – was very critical to the civilian side and their international supporters from USA and Europe. Most of them see the revolutionary change was completely hijacked by leftists and liberals. In July 2021, Hamadok took the wrong advice when he described the tribal leaders of Eastern Sudan who blocked the national road as the remaining elements “Fuloul” of Bashir’s regime.

This position was very odd even from Hamadok’s calm and wise discourse for two years. As a result, not just the people of East Sudan escalated their protests, the Northerners started to establish groups of protesters to block Northern roads. Before that, the Sofi Orders, the pacific side of Sunni Islam criticized the civilian side on several issues. Sadly, the power has changed the civilian activists to aggressive politicians and damaged the image of their project of a democratic Sudan. The worse still coming, the new generation started to think that foreign passports carriers among the government and FCA don’t care what happens to Sudan, they just push liberalism and socialism at the highest cost and then they will leave Sudan to their second home if they failed.

The new generation will not compromise at all in supporting civilian rule but – with this liberal-leftist extremism – the activists could be easily divided and scattered. 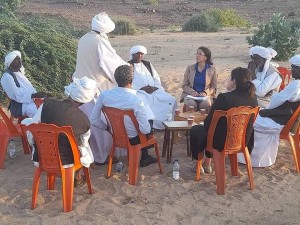 The UNITAMS acted very professionally in the mediation between the military and civilians after the military takeover.

Before that, the UNITAMS delegation paid a successful visit to East Sudan. The head of the political section at the UNITAMS, Stephanie Koury, a US citizen of Lebanese origins was able to speak Arabic with a mixed American Lebanese accent to tribal leaders who were blocking East Sudan. It seems that Stephanie has good experience in working with tribal and local contexts in Africa or the Arab world.

Dr. Volker is not just a fluent Arabic speaker, he knows the culture and the local context, he always listens carefully and asks for explanations for local proverbs. It seems that UNITAMS staff was selected very professionally.

What Can we do to prepare for the elections? 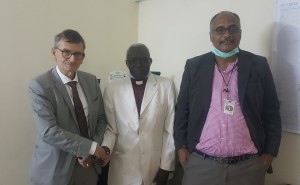 In my second meeting with Volker, I was wearing the hat of the foreign affairs secretary of Gambeel organization for relief and development. Gambeel was founded by Bishop Yunathan KUKU, the head of Lutheran Church in Sudan and a Ph.D. holder in elections laws. Gambeel is an indigenous tree in Nuba Mountains and is famous for its vast shadow that allows people to gather under the tree for social events and reconciliation. Yunathan’s philosophy was to establish the organization from different backgrounds and religions and to intervene in the areas of tension with development and relief to change them to areas of co-existence. Now, we are mapping Sudan and planning for geographical locations of intervention. He said if “the season of elections” is coming why do we wait for electoral violence to happen and then to intervene, we should enhance the co-existence in expected areas.

Volker listened carefully to Gambeel proposal and gave good advice to us. I do believe the head of UNITAMS saved the mission from being part of any conflict and put it in the area of the solutions, not the problems.

Still, things should be done to clear out the controversial image that marred the debate within the UN before launching the mission. Another ongoing debate in Darfur, the two areas and the other areas that witnessing ethnic tension on how the Sudanese government could be supported in protecting civilians.

The end of UNAMID was a big achievement for the civilian-led government and for the military component but it turned to a big challenge.

I liked the interview done by Al-Arabia TV with Dr. Volker because he commented on how Sudan is going in the way of free economy and how this will help donors to support Sudan. I wrote before that the most fantastic achievement for Hamadok’s cabinet was not in the area of political freedom but in the area of economic freedom. Hamadok took almost 20 months to limit the influence of old guards from socialists, communists, and Baathists. The left gave Hamadok a very hard time and rejected the restructuring plan repeatedly. Liberals in Sudan focus on social liberty more than economic freedom and also their alliance with the Communists and Baathists is stronger than needed for democratic liberal change. The conclusion, Hamadok, and the finance minister Dr. Jibreel Ibrahim were alone in the battle but they did it.

I wrote several articles in favor of free economy and the restructuring plan and still, I think the battle has not finished yet.

The mandate of UNITAMS covers the political challenges as well as the economic ones. We need this crisis to be over, so the new civilian government can continue in the economic reforms and UNITAMS can help.