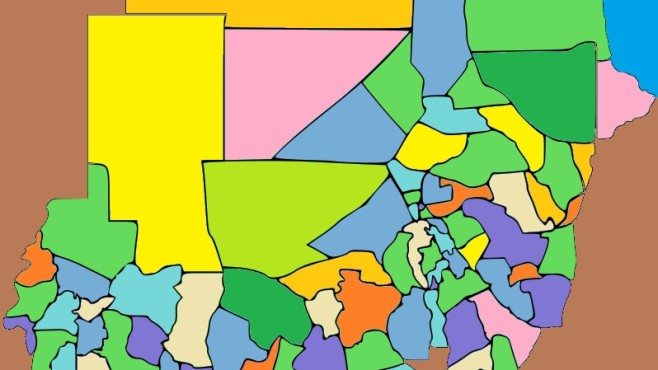 Sudanese people deserve democratic transition and elections, this is what we advocate and work for. Yes, we don’t want to go backward at all, but FFC’s mistake is the reason for this compromise. The recklessness that was practiced in destroying the level of local government obliges us to first restore it, then develop it and re-direct it to democracy.
No doubt, there are environmental and economic factors in the tribal conflicts in Sudan, but the most crucial factor is the absence of local governments, which is a mistake of the FFC transitional government when it dismantled and crushed the local level of government and abolished the post of “the district commissioner”, called the locality in Sudan. The country is divided into 18 states, which are divided into 133 districts. The commissioner is a politically appointed government official who is chosen through partisan-informal consultation between the federal government, the state governor, and tribal chiefs.
The commissioner is accountable to the citizens – through direct interaction even without elections. He heads the security and services committees and can literally meet the governor of the state at any time. In fact, he could easily reach the president or vice president. More importantly, he is always available in case of tribal or ethnic conflicts or minor disputes to bring people together, offer condolences, or mediate between families, small clans, or local groups such as herders and farmers. Problems usually start small and grow if there is no early government interference at the domestic-civilian level, such interference is more needed than security solutions.
During the former regime, the rule was simple: if the citizens complain about the commissioner’s absence or bias, the newspapers write about it and publish the citizens’ complaints, and if the complaints are justified, he will be removed from office. The federal government was intolerant of mistakes at the local level.
The FFC claimed that all 133 commissioners were members of the ruling NCP party, appointed solely to empower NCP and Islamists and not to look after the citizens. Not true, the former regime was more concerned with security and services than politics or ideology at this level of government, these allegations were part of the political propaganda needed at the time to mobilize people for change and not to reform the system.
Now, due to the absence of the commissioners and local governments, a major security gap has arisen. The FFC parties were originally uninterested in the local government level and were very concerned about naming and empowering their members in foreign service and at the federal and then state levels until Burhan’s decisions of October 25, 2021, ousted the four dominant parties from the FFC.
From now on, there is no other solution but to restore the local level of government and appoint those who deserve to become commissioners in the 133 districts, and not prevent many political cadres of the former regime from resuming their political careers. Some of them are still the best, and people still remember and appreciate their experiences and achievements.
This decision is a security and service imperative.